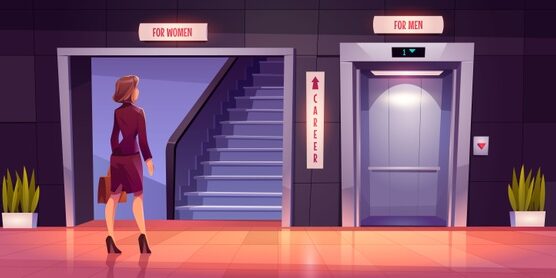 Sexism refers to attitudes or behavior displayed to someone based on their sex or gender. Sexism is based on traditional beliefs, assumptions, and stereotypes about the role of men and women. Though many gender-based stereotypes have been broken in modern times, sexism at the workplace still prevails in both apparent and subtle ways.

In recent decades, there has been an upsurge of women joining the workforce in diverse fields. Despite taking up the same task in the same position as their male counterparts, women are not treated equally. Discrimination against female workers based on pay, career development, and selective behavior/attitude is common.

Survey on Sexism at Workplace

Types of Sexism in Workplace

Impacts of Sexism at Workplace

Mental Health: Sexism can directly hamper one’s mental health. The stress and frustration faced as a result can lead to increased levels of anxiety.

Hampers Self-esteem: Even though women are as capable as men, sexism can break women’s self-esteem. This hamper’s an employee’s work performance.

Employee Productivity: Sexism has psychological impacts on employees. It is very likely to affect an employee’s level of job satisfaction. This impacts employee’s performance levels.

Company Reputation: Gender equality is a fundamental right. It is illogical to discriminate against people on the basis of their sex or gender despite doing the same job as their counterparts. Gender equality is a sign of a fair and inclusive organization. Any instances of sexism can severely damage a company’s reputation.

Workplace Conflict: Everyone has a right to express their opinion. In a workplace, everyone should be given a fair chance to be heard regardless of their sex or gender. Sexist attitudes and behaviors can invite conflict among team members. And internal conflict based on sexism is unhealthy.

Sexual Harassment: When gone unchecked, sexism can turn into sexual harassment. Sexist attitudes like considering women as subdued and further going on to display sexual suggestive can turn out to be harassment.

How Can We Stop It?

Inclusive Workforce: Women should be given opportunities to represent themselves in higher positions in the corporate hierarchy.

Be Transparent: Employers should be transparent about performance evaluation and appraisals. Employees should be promoted on the basis of merit rather than their sex or gender. This boosts employee morale among all types of employees.

Teach About Biases: It should be brought to all employees’ notice about the nature of sexism at the workplace. Workshops can be conducted to educate about sexist biases and how to recognize them.

Open Platform: All employees should be given a fair chance to present their views. Sexism often exists in terms of discriminating opinions of women. So, there should be an open platform to express everyone’s point of view.

Work-life Balance: Female employees with children often struggle with a sexist system at the workplace. Programs like child support can be helpful. This boosts the productivity and loyalty of employees towards the organization.