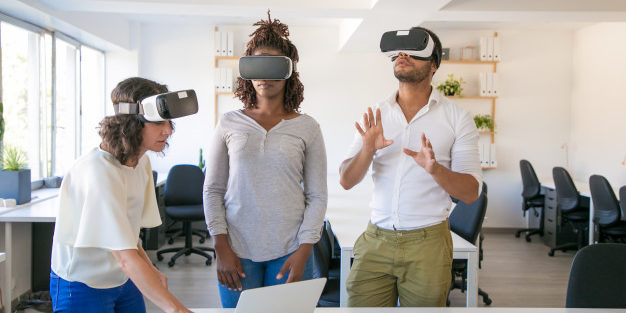 Augmented reality is a technology that layers computer-generated enhancements through an existing reality in order to make it more meaningful through the ability to interact with it. AR is developed into apps and used on mobile devices to blend digital components into the real world. This technology is quickly coming into the mainstream. It is used to display score overlays on telecasted sports games and pop out 3D mails, photos or text messages on mobile devices. Leaders of the tech industry are also using this technology to do amazing and revolutionary things.

Virtual reality (VR) is an artificial, computer-generated simulation or recreation of a real life environment or situation. It is used to create and enhance and imaginary reality for gaming as well as entertainment. Virtual reality is possible through a coding language known as VRML (Virtual Reality Modeling language) which helps to identify the type of interactions for series of images. Both virtual and augmented realities have great potential in numerous fields like: medical science, psychological treatment and training and teachings.

Here are some of the reasons why AR and VR are being useful in various fields:

AR and VR developers will increasingly build smart, cognitive functionality into their apps. An AI technology allows computers to understand what they are seeing through a camera which is essential for the operation of AR. Machine learning algorithms enable these features to become increasingly sophisticated and capable.

2.AR and VR will be used in training and teaching

Both the technologies have immense scope in case of education. Virtual environments allow students to practice anything without risks associated with real-world training. Information can be passed to the student in real-time through augmented environments. This enables students to gain practical knowledge and build their confidence in any subject matter.

Social media giant believed virtual reality would become vital to the way we build shared online environments. Whether it’s for virtual “conference calls” where participants can see and interact with each other or socializing and relaxing with friends, VR and AR have become the major tools. According to Gartner, by 2020 46% of retailers plan to deploy either AR or VR solutions to meet customer service experience requirements.

Two of the most significant trends in new vehicles in 2019 will be voice assistants –with most major manufacturers implementing their takes on Alexa and Siri – and in-car AR. Powered by machine learning, Nvidia’s drive AR platform that uses a dashboard. Audi, Mercedes-Benz, Tesla, Toyota and Volvo have all signed up to work with the technology.

Augmented reality and virtual reality have the potential to shake up the customer experience by enabling customers to visualize products in different settings. Retailers and brands must start using AR and VR in sales, employee training and product development so as to compete with various industries. This enables companies to increase product sales, reduce product design costs and speed up employee training processes.

However immersive technologies always raise new ethical challenges, from issues of access, privacy, consent and harassment to other future scenarios. These technologies also have potential to reinforce negative stereotypes. Are we ready to deal with the impact of fake realities in our academic work and conversations leading to digital illiteracy? Human experience is no longer real when boundaries between the virtual and physical world are blurred. Will VR be a tool for violence and propaganda or will it be used for social good? `